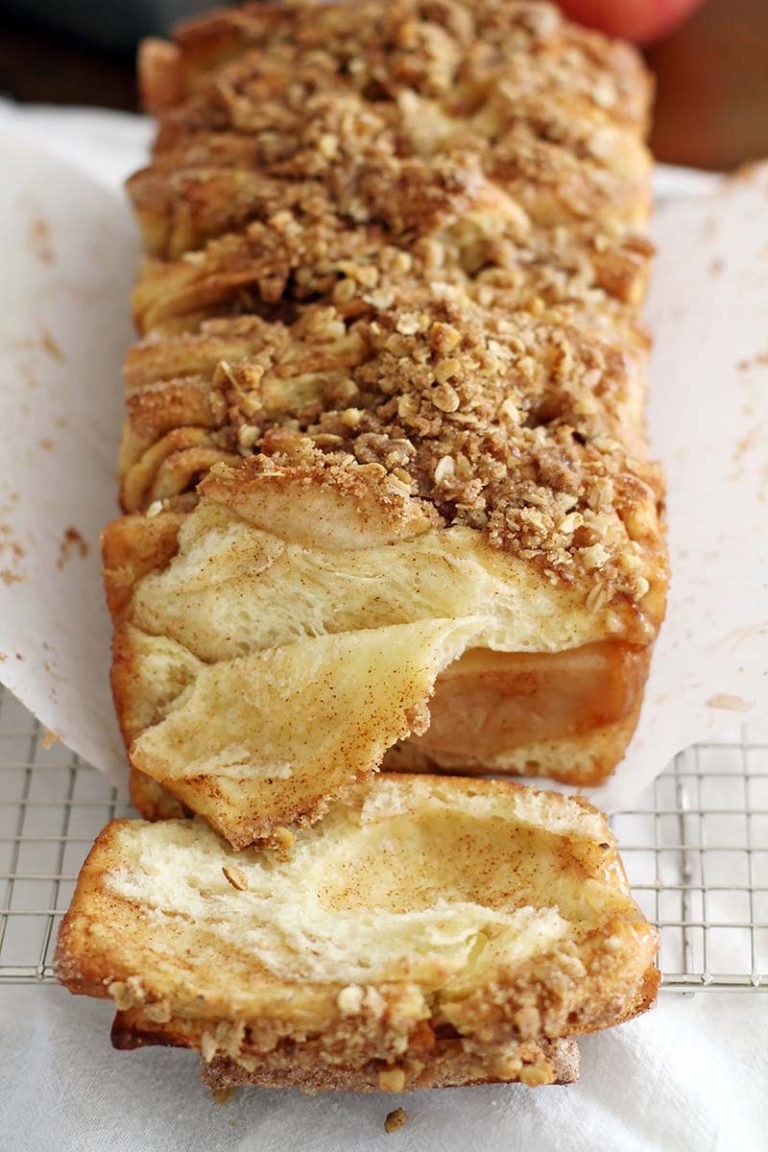 This sweet bread combines fresh apples, melted butter and a sweet cinnamon-sugar filling tucked between slices of soft bread. With a crumbly, sugary streusel to top it off, it's a deliciously comforting fall baking recipe you'll want to make for your family and friends again and again.
Yield 2 (9×5-inch) loaves
Print Recipe Pin Recipe
7

*Depending on how many apple slices you have/use, you might not be able to use all of the dough between the two loaf pans. You can either use the extra dough to make a smaller third loaf, or just discard it. Recipe by Girl Versus Dough.

Tried this recipe for the first time. Came out amazing!! Looked like a professional did it! Posted and shared recipe on Facebook…got a bunch of likes!!

Will this work with gluten free flour?

Hi Tricia,
It is not recommended to substitute GF flour for wheat flour in recipes. Gluten-free recipes typically have additional ingredients to help with the dough structure since there is no gluten in the flour. I would suggest trying our gluten-free recipes.
Happy baking!

Pls can i bave this recipe in grams? Thank you!

Hi Chiara,
I would recommend using this chart to convert this recipe to grams: https://www.kingarthurbaking.com/learn/ingredient-weight-chart.
Happy baking!

What about freezing one loaf?

Hi Kerry,
I’m not sure how well the apples will freeze, but you can certainly give it a try. Check out the Cooling and Storage section for freezing tips.
Happy baking!

Can regular Active yeast be used in place of the Platinum Superior?

Hi Peggy,
Yes, you can substitute Active Dry Yeast for Platinum Yeast. Use the same amount, and follow directions as listed. Rise times may vary, so keep an eye on your dough.
Happy baking!
Carol

Hey! First time baking something like this and i was a bit confused by the wording on the assembly! Took me awhile but i figured it out and wanted to shar it in case anyone was in a position like me! When it says cut north to south, cut it long ways. Then when it says stack the strips on top of eachother you would be folding the strip on top of it’s self like accordion style from when you were young! tucking in apples as you are folding. then you stack these peices into the pan long ways and that is why you need to prop it up! I hope this helps anyone else who is confused!!

Thank you for the information!

Thank you so much, this is the first time I’ve made a “pull apart” recipe and I would never have figured that out.

This bread was amazing!It was a hit with my daughter, husband, grandma, and aunt! Yes, it does take some time and patience but it is not the hardest recipe to make. Follow the instructions and you will be okay.

hi!im baking it right now, and i got to tell you, this whole house smells absolutely scrumptious!! it is a bit involved, but so worth it for the amount it makes and taste. Ive never had such a good home made pull apart bread. I even added roasted crushed pecans to the crumble and giving that a go. Also, i mixed in a little cinnamon/sugar mixture onto the apples along with a squirt of lemon juice…I found that i needed about 3 normal sized apples for everything, or at least 2 large (even cut thinly!). Also, the most interesting thing i adjusted was i made some brown butter for when you spread melted butter onto the dough, just to give it a more nutty taste and add some depth to the flavor. Good luck anyone who tries this out!!

Hi Lisa, I’m a vey visual learner. Have you considered doing a video? Thanks, this looks tasty.

Not sure why someone is rating a recipe a two without even trying it, so I, thinking it at least looks fabulous, will give it a five star rating to even out the two stars.

I am a first time baker of breads this seems pretty easy until the part of rolling out the dough into pieces and assembling it I’m gonna try it cause it sounds so good I will let you know how it turns out I hope this wasn’t too ambitious for me to try.

Hi Lisa,
This is definitely a more involved recipe, but I hope you were successful!