Learn how to make a giant cinnamon roll cake using my easy 7 ingredient homemade cinnamon roll dough and swirling it into one large cake. Top with vanilla icing for an extra indulgent breakfast or brunch. Kids and adults alike can’t get enough and it’s REALLY fun to make!

Here’s my #1 tip: I exclusively use Red Star Yeast in my bread baking and always recommend bakers do the same. A dependable yeast like Platinum Yeast by Red Star guarantees dough success. This is an instant yeast, which helps cut down on rise time. (Always a plus!) Additionally, its careful formula strengthens your dough and makes working with yeast simple.

Here are the basic steps:

Shaping is much easier than it seems. Just keep wrapping strips of dough into a spiral. Since this is a round cake– or shall I say a super mega cinnamon roll– use a round cake pan or pie dish.

To serve, cut it like a traditional cake. You could also uncoil it and let everyone dig right in. Basically, there’s no wrong way to eat a giant cinnamon roll cake! 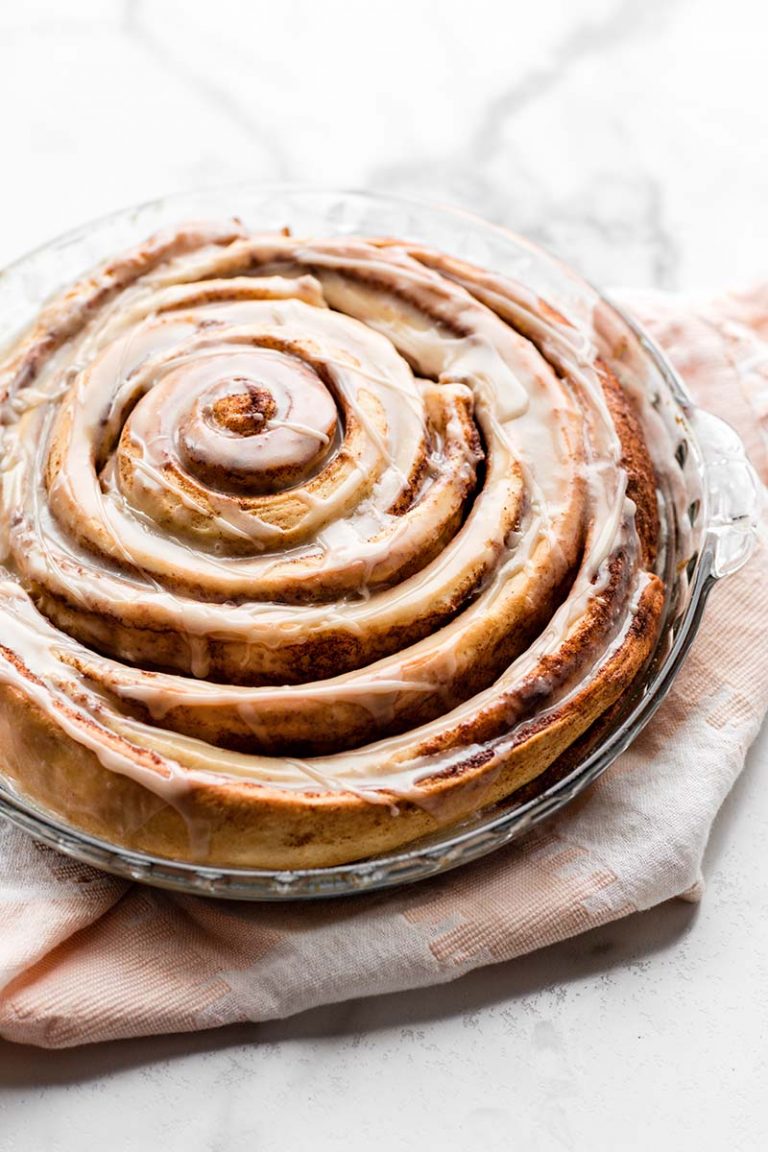 Overnight Instructions: The night before serving, prepare the cinnamon roll cake through step 6. Cover tightly and refrigerate for 8-12 hours. The next morning, remove from the refrigerator and allow to rise on the counter, covered, for 1-2 hours before continuing with step 8. Freezing Instructions: Baked cinnamon roll cake can be frozen up to 3 months. Thaw overnight in the refrigerator and warm up before enjoying. You can also freeze the unbaked cinnamon roll cake and here’s how: bake the cake in step 8 for only about 10 minutes. Cool completely, then cover tightly and freeze. To thaw and bake, take the cake out of the freezer and put into the refrigerator a few hours before you wish to serve it. Before serving, finish baking it. Alternate Icing:
Maple Vanilla Icing: Simply replace 1 Tablespoon of milk/cream with pure maple syrup. If desired for a coffee flavored icing, replace all of the milk/cream with strong brewed black coffee.   Recipe by Sally’s Baking Addiction.

Sally McKenney is a professional food photographer, cookbook author, and baker. She has written, photographed, and published more than 1,000 from-scratch recipes and written three cookbooks. Her thorough step-by-step tutorials give millions of followers the knowledge and confidence to bake from scratch.

This giant cinnamon roll looks awesome! It’ll be a great way to start this Saturday morning!